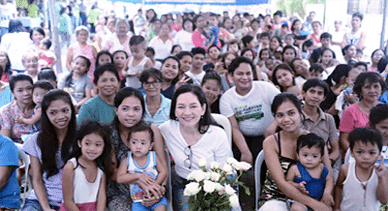 MANILA – Senator Risa Hontiveros on Monday said she will propose provisions on the budget of the Department of Finance (DOF) to give incentives to local government units (LGUs) when they borrow from banks and financial lenders to help the national government in financing local projects.

“We could limit this peso-for-peso matching requirement to first and second class LGUs — the same LGUs that Senator Nancy (Binay) mentioned earlier in her interpellation. With the rest providing one peso for every two that the national government is able to offer or up to the limit of their capacity to borrow,” Hontiveros said.

LGUs were encouraged to raise funds via borrowing from Landbank, which still has P300-billion fund window that the LGUs can tap, according to earlier statements of Finance Secretary Carlos G. Dominguez III, according to Hontiveros.

“I can only surmise that the Land Bank borrowing window has been set at P300 billion and not just P180 billion, because the borrowing and paying capacity of LGUs is about to rise dramatically, precisely as the implementation of the SC decision on the Mandanas Ruling nears in 2022,” Hontiveros said, also noting “very low” interest rates that LGUs can take advantage of.

She was referring to the Mandanas-Garcia petition to the Supreme Court that seeks to empower LGUs and to ramp up growth of regional economies by giving them higher internal revenue allotments (IRA) and transfer implementation of various programs and projects from NG to LGUs.

Her second proposal was to require the use of the LGUs’ borrowed funds to finance two main programs by 2021 or 2022.

One is to fund the projects in the NEDA Regional Development Council’s (RDC) recovery plans for the coronavirus disease (COVID-19) per region, particularly in the provinces and chartered cities.

The other is to finance projects that provide income support to the people through local Social Amelioration Programs (SAP), training, and employment through local infrastructure, as well as livelihood support to self-employed entrepreneurs.

Senator Sonny Angara said the DOF is “generally okay” with the provisions proposed by Hontiveros, “as long as the creditworthiness of the LGU was not impaired.”

“In other words, if the LGU wishes to borrow in order to avail the matching proposed by her honor, then that’s okay [with the DOF] — as long as they meet the prudential guidelines for lending as set [by banks and financial lenders] which they usually have a seal for financial governance, among others,” Angara said.

Earlier, economists projected that the SC ruling on the Mandanas petition — which will provide higher IRAs to LGUs — is equivalent to over P230 billion or 0.92 percent of the national gross domestic product by 2022.